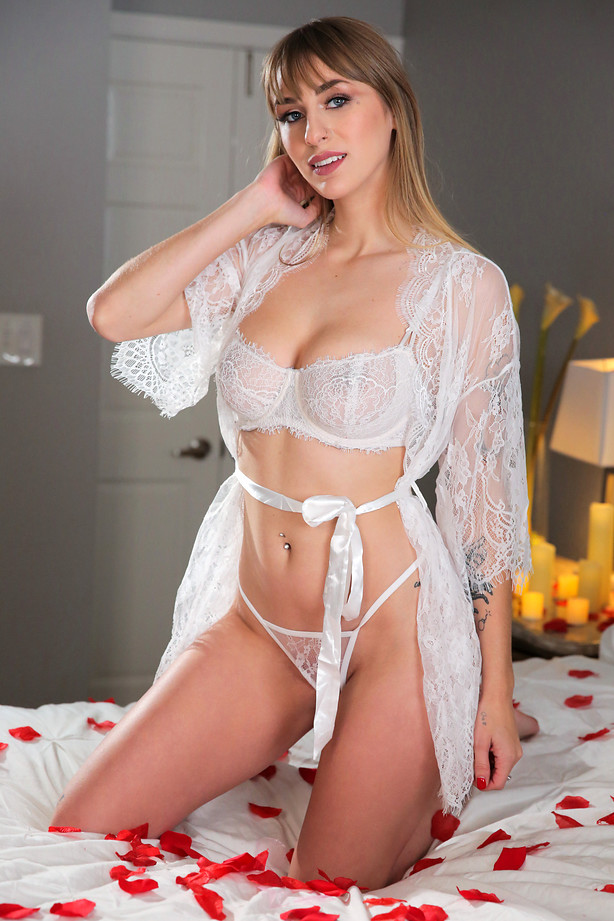 It’s Angel Young’s anniversary, and she has a bit of a surprise planned for her hubby. Decked out in sheer lingerie that really highlights her incredible body from her tits to her slim belly, Angel lays down to snap some naught selfies. She sends her photos to her husband, along with texts begging him to come home. Angel’s husband bursts her bubble by telling her he has to work.

When Angel hears about her husband’s plan, she is disappointed but open to taking care of her own needs. Slipping her hand between her thighs, she begins working herself towards a climax as she masturbates her tender clit. While Angel is diddling herself, her husband leaves his phone and walks away from his desk. Who should pick it up and see those naughty pictures but hubby’s boss, Damon Dice – who also happens to be Angel’s ex boyfriend. Angel may not realize it, but she has just totally ignited an old flame.

Damon knows that Angel’s husband will be working all night, so he takes it upon himself to go to Angel’s home and take care of her himself. Although Angel is surprised to see Damon, she doesn’t put up much resistance as he captures her lips in a searing kiss. They relocate to the bedroom as Damon sheds his top between kisses. He fills his palms with Angel’s incredible breasts, kneading them and squeezing her nipples as he reacquaints himself with her stunning body.

Laying Angel down, Damon takes it nice and slow as he lifts her thigh and slides on home. Their coupling has a feel of familiarity as he gives it to her in just the way he knows she likes. As Damon works his hips, he does his best to let Angel’s moans guide his strokes.